Some of the bird species found on Beaver Island are familiar residents like chickadees, woodpeckers and grouse, while others visit the archipelago as part of their annual cycle.  In the winter, northern visitors such as Snowy Owls, Horned Larks, Snow Buntings and Long-tailed Ducks can be found.  However, the greatest diversity of species can be seen during spring and fall migration, as well as during the summer breeding season.  Large flocks of warblers, vireos, sparrows, and thrushes feed along the coastal forests and dunes as they migrate in spring.  Many of these birds take advantage of a plentiful food source in May, the large swarms of non-biting midges that emerge from Lake Michigan.

Some of these birds like Black-throated Green Warblers and Hermit Thrushes stay to breed on the islands, while others like Palm Warblers and White-crowned Sparrows just stop over for a day or two on their journey north. Additionally, the archipelago is a summer breeding home for many waterbirds, waterfowl and shorebirds.  The endangered Piping Plover may breed on sandy beaches where sandpipers can also be found.  Common Loons nest on several inland lakes while Bald Eagles and Osprey soar overhead.  Ducks and geese can be observed on these inland habitats but can also be found on the big lake.  Gulls, terns, herons and cormorants take advantage of secluded outer islands to form breeding colonies and raise their young.

The Beaver Archipelago is a splendid location to view a great diversity of birds because it provides important habitats for many members of the Great Lakes avian community. 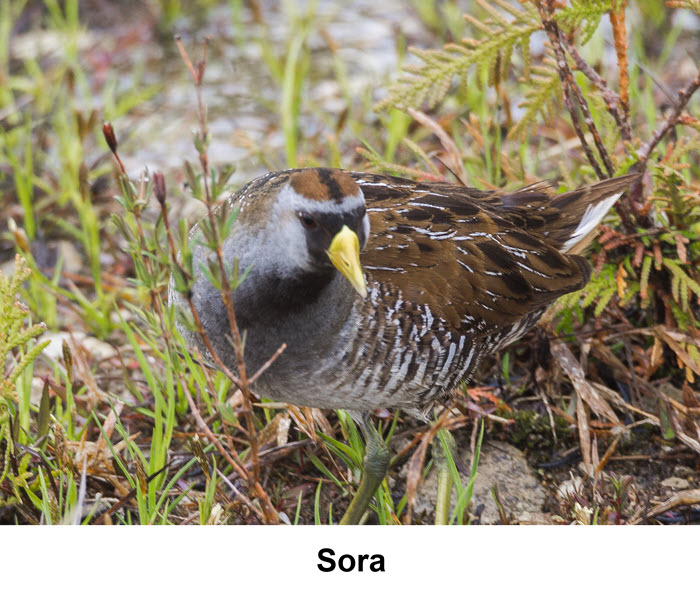 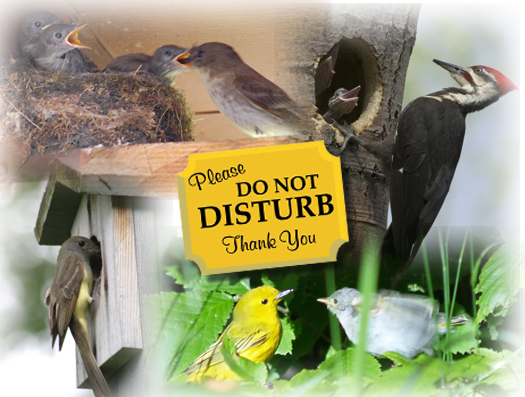 Enjoy the avian richness of our special island! Out of respect for island property owners and to protect our migrating and nesting birds, please observe the following rules of birding etiquette: 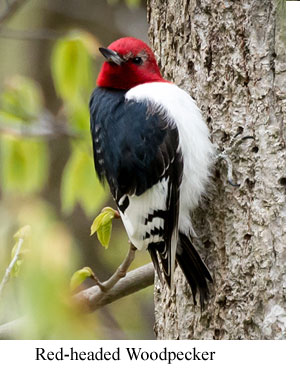 Migratory birds encounter numerous threats during their life time, but the most serious threat to their existence is habitat loss, both in wintering and breeding areas and on migratory routes in between.  To learn more visit https://abcbirds.org/threat/habitat/ and https://www.fws.gov/birds/bird-enthusiasts/threats-to-birds.php.

The most damaging invasive species to birds in the United States is the domestic house cat.  Feral and outdoor pet cats are estimated to kill 2.4 billion birds every year in the U.S. alone.  For more information visit https://www.allaboutbirds.org/news/faq-outdoor-cats-and-their-effects-on-birds/.

Colliding with man-made structures is an especially serious threat to migratory birds.  It is estimated that over one billion birds crash into window glass each year in the United States, and another 32 million die as a result of encounters with power lines and communication towers.  For more information visit https://www.allaboutbirds.org/news/why-birds-hit-windows-and-how-you-can-help-prevent-it/.

Often these products do not kill birds immediately but lead to a slow death from accidental consumption.  In addition, pesticides reduce the insect populations on which birds depend especially during migration and nesting.  To learn more about birds and pesticides visit https://abcbirds.org/program/pesticides, and go to https://www.ecowatch.com/birds-microplastics-food-chain-2646064992.html to learn more about the effect of plastics on birds.

Through research, the Audubon Society has determined that “While lights can throw birds off their migration paths, bird fatalities are more directly caused by the amount of energy the birds waste flying around and calling out in confusion. The exhaustion can then leave them vulnerable to other urban threats.” https://www.darksky.org/what-you-should-know-about-bird-migration-and-light-pollution/

The Cornell Lab of Ornithology has an excellent web page on Seven Simple Ways to Help Birds at https://www.birds.cornell.edu/home/bring-birds-back/.

Many birds, migratory songbirds in particular, depend on insects for energy while migrating and for feeding their young.  Birds did not evolve with the sterile landscaped yards that are found in North America and Europe and neither did the insects on which birds depend.  Mown lawns and non-native ornamental plants are as detrimental to the survival of birds as any of the threats listed in the previous section.  Dr. Doug Tallamy of the University of Delaware is a strong proponent of rewilding suburban yards by replacing them with native plants.  His persuasive arguments are expanded in his books, Bringing Nature Home: How Native Plants Sustain Wildlfe in Our Gardens (2007) and Nature’s Best Hope: A New Approach to Conservation that Starts in Your Yard (2020).  Information about Dr. Tallamy’s work can be found at https://www.smithsonianmag.com/science-nature/meet-ecologist-who-wants-unleash-wild-backyard-180974372/ and Saving Birds Thru Habitat (https://www.savingbirds.org/). 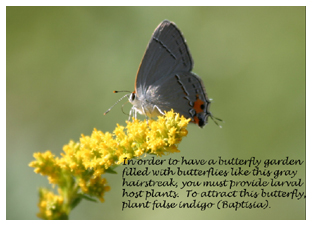 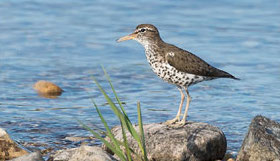 Artificial nesting structures, such as nest boxes, are often used to increase opportunities for nesting birds that are experiencing declining populations.  Although artificial structures cannot replace natural nesting sites, they can supplement the number of suitable nesting sites, thus increasing the reproductive success of the bird species in question.

Beaver Island maintains multiple artificial nesting structures for birds.  A chimney swift tower has been installed next to the St. James Township administration building on Kings Highway (#4 on the Beaver Island Birding Sites map).  Several kestrel boxes are located near the parking lot of Little Traverse Conservancy’s Little Sand Bay Preserve (#12 on the Beaver Island Birding Sites map).  The Beaver Island Golf Course, located south of the Little Sand Bay Preserve on East Side Drive, has approximately a dozen bluebird houses installed around the golf course.  All three of the species that use these nesting structures are experiencing declining populations, so the goal of island bird supporters is to provide them with more nesting sites than occur naturally.  For more information on artificial nesting structures and how to build them visit https://www.nrcs.usda.gov/Internet/FSE_DOCUMENTS/nrcs144p2_054093.pdf. 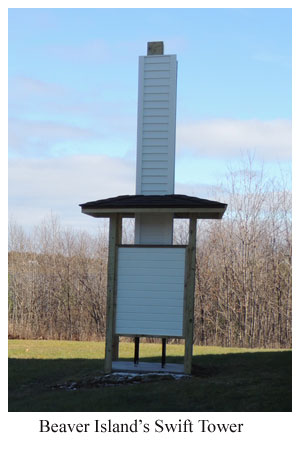 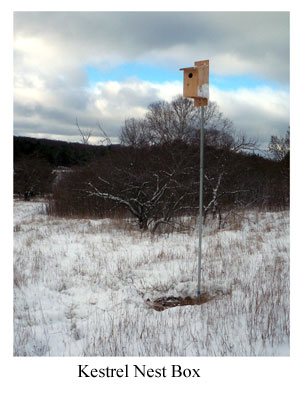 Other than the European starling, Beaver Island has only one invasive bird species, the mute swan (Cygnus olor), that has affected native birds and island ecosystems.  The mute swan is native to Europe and Asia and was brought to the United States in the late 1800’s as an elegant and graceful avian ornament for public parks and private estates.  Some of the birds escaped from these areas, and the size of the mute swan population in Michigan and other Great Lakes states has grown extremely rapidly.  According to the Michigan Department of Natural Resources (DNR), a pair of mute swans was introduced near Charlevoix in 1919.  From this single pair, the state population grew to 2000 birds in 1990 and over 15,000 by 2010.

Mute swans are considered beautiful birds by many people, but beauty is in the eye of the beholder.  Although their striking physical appearance is a plus for these large swans, there is a dark side to this bird.  First, they are very aggressive.  They harass native waterfowl, such as loons and trumpeter swans, and prevent them from nesting.  Common loons on both Barney’s Lake and Font Lake on Beaver Island have lost nesting opportunities due to the aggressive habits of mute swans on the lakes.  Mute swans are even aggressive toward humans and will attack anyone, especially a small child, who approaches their nest.  Second, mute swans destroy wetland vegetation.  Mute swans eat aquatic plants, and they are messy eaters.  Not only does an adult swan consume four to eight pounds of vegetation a day, but it also uproots a lot more vegetation than it actually eats.  This behavior has negative consequences on other animals.  Many small fish, aquatic insects, and other invertebrates live in the vegetation mute swans eat, so when the vegetation is gone, so is their habitat.  These animals serve as food for other animals, so when they disappear, so do the animals which feed upon them.

Because of the large number of mute swans in the state of Michigan, the birds have put pressure on valuable wetland habitats that are needed to sustain the rich biodiversity of the Great Lakes.  The Michigan DNR’s goal for the species is to reduce the state-wide population to less than 2000 by 2030.  To promote these efforts the DNR issues permits to landowners to remove mute swans and their nests and eggs.  More information is available at https://www.michigan.gov/invasives/0,5664,7-324-68002_73846-369897–,00.html. 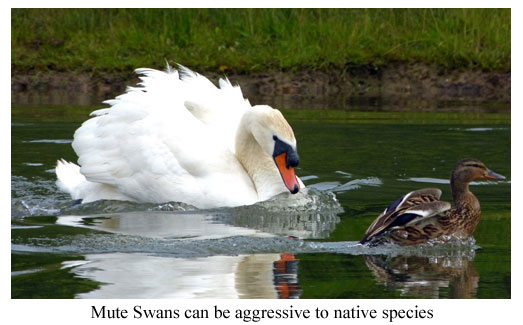